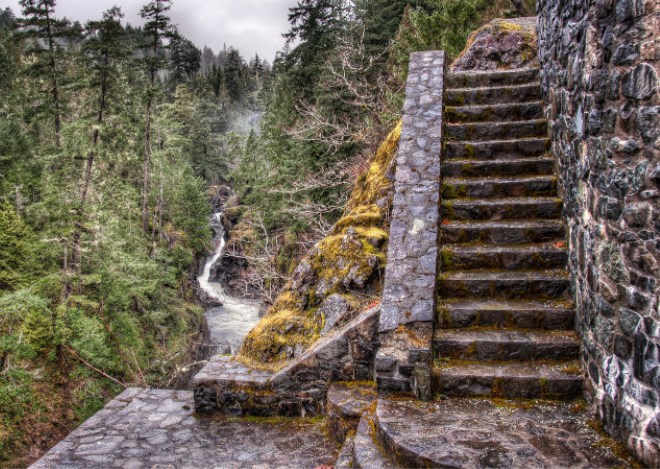 “If you go down in the woods today, you’re sure of a big surprise….” The woods are an amazing, beautiful, and adventurous place that calls out for the Indiana Jones in us. However, nature has its secrets, and not all of those are meant for exploration.

Curiosity is human nature. Anything that compels the human brain to ask questions does not hold back people from diving in search of answers and explanations. However, some secrets best remain hidden. Some secrets are not meant to be explored or known. Some things are better left unexplained.

This brings us to what this blog post is all about. In this blog post, we will be discussing the top 5 mysterious staircases in the woods.

What are staircases in the woods?

It is weird, right? A staircase existing right in the middle of the woods sure is an eerie occurrence. Woods are unpredictable places, which is somewhat the part of all the fun of woods’ exploration. However, an occurrence of a staircase in the idle of the woods is not only unexpected but very creepy, too.

It all started when people, mostly explorers and campers all over, started encountering weird stair structures in the woods that were just there, for no apparent reason (or maybe there was a reason that no one knows or is supposed to know about).

People with such encounters started sharing their stories online, and this grew as an internet phenomenon. People came out with their stories and experiences on Reddit, and later this was developed as an entire season on Channel Zero.

The whole deal began when a National Park rescuer started talking about a Wendigo-like entity in proximity to the stairs. The story spread like wildfire, and people shared different accounts, from personal to instances they had heard about. This is where the entire phenomenon of ‘mysterious staircases in the woods’ originated from.

Do these ‘mysterious staircases’ even exist?

Much to the skeptics’ dismay out there, these staircases do, in fact, very much exist. Stories and encounters of these mysterious staircases have been heard from all over the world. Sometimes they are a brick structure, sometimes stone, and sometimes even wood, all in different shapes and sizes, most of them in ruins.

Without further late, here are the top five mysterious staircases found in the woods.

As stated earlier, a lot of staircases and structures exist that seem to have a logical explanation for their existence. The Etruscan Pyramid in Viterbo, Italy, is dated back to the 7th century BCE. It is a huge megalith edifice composed of stairs and a huge platform.

Homing in the Siem Reap province of Cambodia, Pleu Cere is a 2000 foot long staircase that leads to somewhere no one knows. It is believed to date back to between the ninth and thirteenth centuries. Some experts believe that it might have led to a temple or the city of Mahendraparvata that is now covered with dense forest vegetation.

Some even speculate that the staircase was built by King Suryavarman II to get supplies for the Angkor Wat in the twelfth century. Nonetheless, needless to say, all these theories remain to be speculation, and it is still not known where these stairways lead to.

3.      The Staircase of Missing Time, Philippines

This case is one of the original cases that stirred up the whole heat behind the mysterious staircases found in the woods. The incident revolves around a forest ranger that goes looking for people lost in the forest. During one of his patrolling sessions, the ranger came across two staircases leading deep into the forest. To get a better vantage point, he ascended the stairs. The first set of the staircase was a decorated one, while the second one seemed like someone made it out of stone. While climbing the stairs, he came across a vicious dog, so to avoid him, he climbed the stairs further.

A CDC team was set up when reports of animal mutations surfaced in the 40s. During the entire period of investigation, it was reported that some random staircases were giving off a frequency. The camp was set up 30 meters from the staircases. The next morning, the staircase had vanished from its spot, leaving a burnt mark. In the next two days, it reappeared 50 meters away. They tried to take the samples of the staircase, but the wood was hard as a rock and wouldn’t even chip. It vanished again six days later. No one knows who the recipient of the frequency was.

This story revolves around the personal account of a ranger who narrated the incident to a rookie ranger to warn him against stairs in the forest. He told him that once when he and another ranger came across a staircase in the forest. The other man decided to climb the staircase and climbed atop. As soon as he reached out his hand to grab a tree branch, his hand was cut off, leading to profuse bleeding. No one knows who or what cut the hand. The cut-off hand was never found.

Another story involving the same staircase revolves around a woman who climbed the stairs because she thought something was wrong. As soon as she climbed atop, she fell to her death. It was later reported that she had a fatal aneurysm.

It goes without saying that reading about such encounters gives all kinds of ominous vibes out there. People who have had such encounters or those living within the proximity of a forest advise against climbing any such stairs, for they can be dangerous.

Whether you believe in paranormal stuff or not, it is definitely not something to be messed with. Even from the perspective of safety, one should avoid climbing such stairs because the damage they’ve suffered could lead to fatal injuries.

This article was submitted to us by Sophia Scott. She is content creator at escaperoom.com. She’s a passionate young woman, mother to an amazing nine-year-old, and an avid reader. Over the years, writing has helped her explore and understand the world as well as her own self. She loves to travel, meet new people, and spend quality time with her daughter.